A number of Christian-themed satire news sites have cropped up recently, making me think I could find another source of writing revenue by contributing a few stories that could lead to new clients. It turns out I was wrong.

Apparently, my satirical writing skills are not up to snuff. I learned that one man’s satire is another’s boring read, which is to say that not everyone has the same sense of humor. So, in the spirit of letting you decide for yourself, I submit to you one of the satire pieces I offered for publication — only to be completely ignored by those site editors I hoped would be amused.

Bellevue, WA – Attendees at a mid-week small group gathering in Bellevue are lucky to have escaped unscathed after an explosion ripped through their meeting place earlier this month. The group, meeting weekly at the Holy Grounds Coffee House on the campus of Montage Church, had been engaged in conversation for about an hour before the blast occurred just after 8:10 PM on March 15.

No one was injured in the blast, but Holy Grounds was reduced to a pile of smoldering rubble and twisted metal. According to local fire officials, small group members were lucky to have escaped.

“We were sitting around, talking about the impact of cloven tongues of fire on social justice in a post-Jesus Jerusalem when it happened,” said small group facilitator Maeve DuBois. “I mean, the Holy Spirit just…just fell on us in a powerful way that just, I mean, just overwhelmed the group and the building at the same time.”

Added small group member Pierce Bryce: “Oh the Spirit was truly here tonight. I know the fire people are talking about some other cause for the explosion, but I know it was God. I was here, bro. I saw it!” 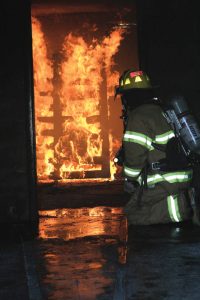 Despite a firm belief among attendees that the blast was the work of a divine moving of the Holy Ghost, fire officials don’t necessarily agree. They are now focusing their investigation on the possibility that one of the volunteers at Holy Grounds may have mistakenly put a French press in the microwave.

“Right now it looks like we have an exploding French press that may have been exacerbated by an open flame fondue pot,” explained fire investigator Dakota Smith-Kline. “We see this kind of thing all the time when young people who barely have time to look away from their iPhones are put into the dangerous setting of a commercial kitchen.”

Montage co-pastors Rudy and Tess Monatgue told reporters that, in addition to no one being hurt, they are just glad that the rest of the church campus suffered no damage in the explosion.

“We have a very expensive mortgage on this property,” remarked Tess. “We need to keep the seats occupied and warm every Sunday or we go bankrupt.”

As for the small group, they will be looking for a new meeting spot while Holy Grounds is rebuilt. DuBois says she is looking at every available opportunity, including the homes of small group members and the cavernous 2300 sq. ft. front lobby of the church’s main building. Her only concern, she told reporters, is that another visit by the Holy Spirit could be even more destructive.